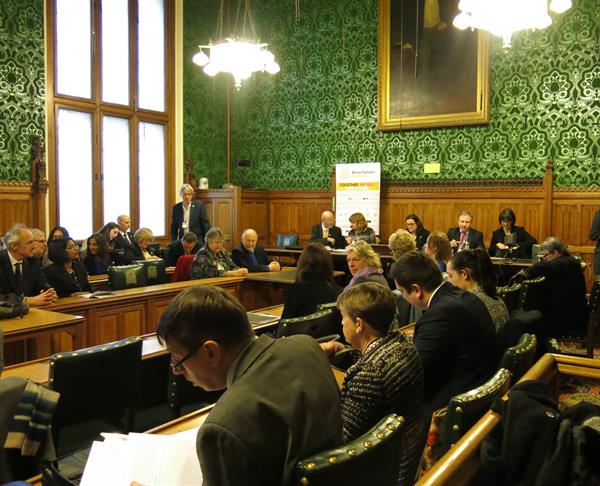 15 December 2016
As 2016 comes to a close, members of the All Party Parliamentary Group (APPG) on Brain Tumours and the brain tumour community gathered on 14th December to hear about the progress of the Government’s Task and Finish Working Group on brain tumour research.

The Working Group was set up following the Petitions Committee debate into their inquiry and subsequent report; ‘funding for research into brain tumours’. The group met for its inaugural meeting at the headquarters of the Department of Health in October. Comprising of clinicians, researchers, charities, Government officials and patient representation, the group will be addressing the need to increase the level and impact of brain tumour research.

Rebecca Harris MP, Chair of the APPG opened the APPG meeting by noting that this year has seen extraordinary leaps forward in our community’s fight against this devastating disease. It started with the collection of over 120,000 signatures in support of the Realf family’s petition. Other milestones included the launch of the Petitions Committee’s inquiry and the convening of the Government’s Task and Finish Working Group, none of which could have been possible without the support of our community’s many activists, supporters and patients’ families. On behalf of the APPG, she gave thanks to everyone that has made our success so far a possibility and noted that the UK could become a beacon of light in the global brain tumour research community.

The APPG welcomed several guest speakers to update Members on the progress of the Task and Finish Working Group and what opportunities lie ahead for brain tumour research. Speakers included Dr Helen Campbell, a Portfolio Manager from the Department of Health who provides the Secretariat to the Working Group. Mr Kevin O’Neill, Head of Neurosurgery at Imperial College Healthcare NHS Trust and a member of the group. Dr Kieran Breen, Director of Research, Brain Tumour Research.

Dr Campbell started by congratulating everyone involved in our journey to this point. The Petitions Committee’s first ever inquiry report; the first Task and Finish Working Group of its kind to look at brain tumour research. She said there has been no precedent for this – those who have led and supported this campaign are indeed trail blazing.

Helen noted that the Working Group is due to meet again in January and will be co-chaired by Health Minister Nicola Blackwood MP and Professor Chris Whitty, Chief Scientific Adviser to the Department of Health. The inclusion of the Minister at this stage represents an acknowledgement of how far proceedings have developed and the priority now being given to brain tumour research.

If the Working Group is to be successful, Helen emphasised the need for consensus and that it is for the group’s membership to identify the opportunities that can ultimately be translated into measurable recommendations. Areas she felt were worthy of exploration include; building up the capacity, capability and skills of the research community; developing grantsmanship – researchers’ ability to win grants for brain tumour studies; and better selection of therapies for trials. She suggested that cross-fertilisation from other disciplines would be key to the next stage of research, building upon our success of shining a spotlight onto brain tumours.

A focus on clinical excellence

Mr Kevin O’Neill shared his congratulations with the APPG on the new precedent set down by the Working Group which he welcomed as key to our fight and an opportunity we must take advantage of. Kevin said it has helped bring all the players of the brain tumour community together, helping everyone involved to define and navigate the landscape going forward.

Kevin explained how, in recent decades, very little impact has been made in advancing treatments. There now exists a great need for much more drive in the capacity of basic scientific research in reaching the next level. This will then enable experimental therapies to be taken into trials and into clinics for patients as standard treatments.

For this to be achieved, Kevin described how there needs to be clear continuity from bench-to-bedside with a clinical pathway that is capable of moving patients through to the latest therapies. A standardised pathway is emerging which focuses on patient care and the design of studies whilst neurosurgery specifically is sorting itself out with measurable NICE guidelines centered on improvement.

However, Kevin made clear that there is more still to do. Yes, fellowships are being created but fighting brain tumours requires a multi-disciplinary approach and there is not currently a training programme that incorporates these multiple skillsets. Most oncologists develop an interest in neuro-oncology through a professional interest in another site-specific cancer such as breast or lung cancer. More effort is required to promote and recruit medical students and young scientists straight into brain tumour research labs and neuro-oncological specialities.

Kevin believes that if our research and clinical sector can coordinate itself nationally, the UK stands a very good chance of becoming a global leader in brain tumour research. Other countries efforts are fragmented but, with the correct consideration of funding and commercial opportunities, the UK could lead the way.

Filling in the gaps

Following Mr O’Neill’s clinical perspective, Dr Kieran Breen posed several questions for the APPG to consider. Where are the gaps in our research capacity? And how do we keep them?

Kieran explained how once students complete their PhDs, the brain tumour research community lose many of them to other disciplines and cancers. Not all of the UK PhD graduates can continue their work in the UK. Some of them also move to posts overseas. Brain Tumour Research’s four Centres of Excellence are part of just a small number of specialised brain tumour centres in the UK.

Kieran noted that extra research capacity is key to understanding all the different types of brain tumours, which number over 120. Brain Tumour Research, in partnership with braintrust and Charlie’s Challenge have funded BRAIN UK based at the University of Southampton. It coordinates a network of NHS and Academic Centres that provide CNS tissue for vital research.

Kieran invited Dr Kathreena Kurian to contribute. Kathreena is based at the University of Bristol, is a neuropathologist for brain tumour research at North Bristol NHS Trust and runs Brain Tumour Bank South West (BRASH).

She described how there is a need for good quality brain tumour tissue for research but samples can currently only be collected from brain tumour debulking surgeries. To improve availability, they have started to develop proper cataloguing protocols along with clinical datasets and detailed blood data. She noted that progress so far has only been possible through the incredible goodwill of project partners and patients.

Following a question and answer session which included contributions from Alistair Carmichael MP on European funding and from Mark Durkan MP, the meeting was drawn to a close.