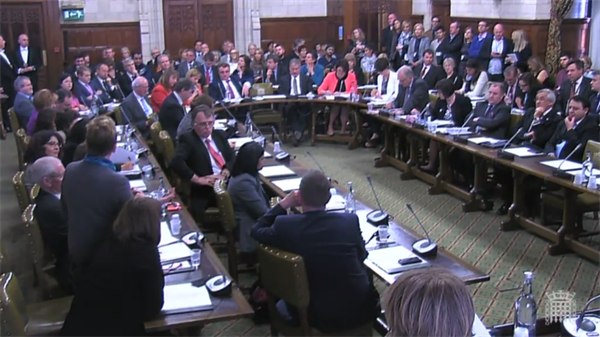 The UK Government has formally acknowledged during the first brain tumour debate prompted by the Petitions Committee Inquiry that more needs to be done for brain tumour patients and their families.

Health Minister George Freeman MP announced a package of measures at a Westminster Hall debate on Monday 18th April which was prompted by an e-petition launched by the family of Stephen Realf, lost to a brain tumour at the age of 26, and backed by Brain Tumour Research.

He said the Government will now:

1. Establish a 'Task and Finish' working group at the Department of Health. This will be a special project team who will conduct an in-depth review of the key areas and recommendations set out by the Petitions Committee in their report.

2. He will request that the National Institute for Health Research (NIHR) produce a national register within a year to examine how public funds are spent on research. This will examine spending on different disease areas and different organs, including the brain, by the different treatments used.

3. To seek to improve levels of earlier diagnosis and include brain cancer in the Genomics England programme.

Our Chief Executive, Sue Farrington Smith, who lost her niece Alison Phelan to a brain tumour just before her eighth birthday, said: "I am immensely proud that, with the support of thousands of patients, families and activists, the woeful underfunding of this dreadful disease has now been acknowledged. Finally, our voices have been heard and the work of the past 15 years has not been in vain.”

Where can I see a list of the MPs who attend and contributed to the debate?

The names and contributions of MPs is available in Hansard, the official report of all proceedings that take place in Parliament. Anyone can view these reports online and read what their MP had to say in the debate.

Unlike a lot of debates that take place in the main chamber, there was no vote at the end of this debate so there is no official record of MPs who attended but did not personally contribute.

My MP was there but they didn’t speak, why?

Westminster Hall debates of this kind are only allocated three hours and it is the role of the Chair to fit in as many speakers as possible but sometimes not everyone gets a chance to speak.

If your MP has a Ministerial role they are not normally allowed to contribute to a debate. George Freeman MP, Health Minister for Life Sciences, spoke for the Government at this debate.

The Minister said that the Government and Department of Health will review the progress made on the national register at next year’s NIHR Parliament day. We will continue to hold them to account on their other commitments too.

Thank you to everyone who urged their MP to attend. Together we will find a cure.