Every day is a hat day for Emma

Emma, whose husband Brian was diagnosed with a brain tumour, is wearing a different hat every day in March, which is of course Brain Tumour Awareness Month.

She is choosing from a great variety of hats, ranging from caps bought on holiday, fascinators for weddings and her Brain Tumour Research hat made by ethical company Kusan (available to buy here) to her more comical ones like the Jester and Where’s Wally hats. Emma then posts a daily photo on social media and asks friends and family to donate.

After suffering a seizure at home, Brian, now 56, underwent surgery to remove a grade 2 oligodendroglioma which had been growing unnoticed for at least 10 years. He hadn’t had any signs previously that anything was wrong – no headaches, numbness nor blurred vision.

Brian was taken to A&E where initially it was suspected he had suffered a stroke and he underwent several MRI scans. The results revealed he actually had a brain tumour – a huge shock for the devoted couple.

Happily, surgery removed around 98% of the tumour. Brian then underwent radiotherapy, followed by six cycles of chemotherapy which finished in June last year. His MRI scan in December was a definite cause for celebration as it showed that either the tumour had shrunk to be so small it was no longer visible, or that it had completely gone.

It was only when Brian was first diagnosed that Emma realised there was a national charity raising funds for research to improve the lives of patients and help find a cure almost on her doorstep in Milton Keynes.

Having called into the offices and met some of the team, Emma decided to volunteer for the charity on a regular basis. She is currently working hard to meet the growing demands for Wear A Hat Day fundraising packs and enjoys her time working alongside other volunteers who have become good friends.

Emma says that knowing she is making a difference and helping the cause to find a cure for patients less lucky than Brian is a huge motivation.

This is Emma’s third year of wearing a different hat throughout Brain Tumour Awareness Month. We wish her all the very best and are sure that she and Brian will be a huge inspiration to others. 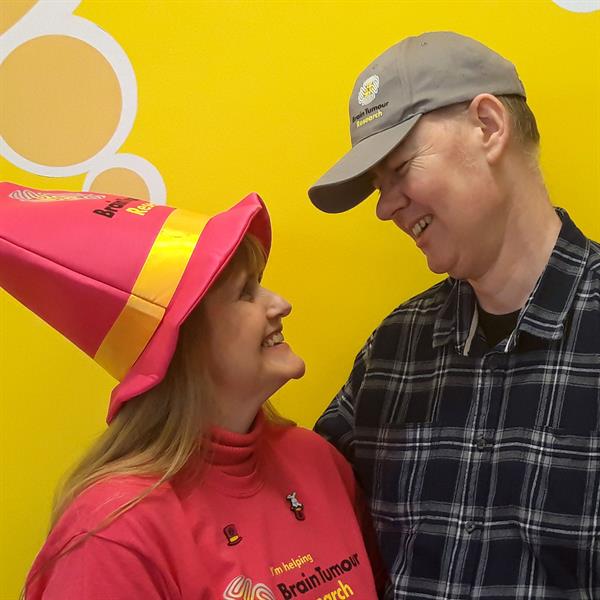