Patron
The most celebrated hat designer of the age Philip Treacy became a patron of Brain Tumour Research in 2011.
Philip was born in Ahascragh, a tiny village in County Galway in the West of Ireland where he lived with his parents, seven brothers and a sister.

He graduated with first class honours and set up a workshop in the basement of Isabella and Detmar Blow’s house on Elizabeth Street, Belgravia.

In 2005 he created the hat the Duchess of Cornwall worn to her wedding to HRH the Prince of Wales.

In 2007 Philip was appointed as an honorary Officer of the Most Excellent Order of the British Empire (OBE). The honour was conferred on Philip by Her Majesty The Queen in recognition of his services to the British Fashion industry.

In 2011 Philip designed 36 hats for the Royal Wedding of the Duke and the Duchess of Cambridge on the 29th April (including the hat worn by Princess Beatrice which was later auctioned for charity raising in excess of £80,000).

Philip has always worked with pop royalty such as Grace Jones, Rhianna and Lady Gaga. In 2012, in collaboration with Riccardo Tisci for Givenchy, Philip designed the gold Egyptian hat worn by Madonna at the Superbowl.

Philip has said “I make hats because I love hats” and so he is the perfect supporter for our national Wear A Hat Day Campaign.

Commenting on Wear A Hat Day Philip said “Brain Tumour Research's Wear A Hat Day is an excellent initiative; fashion is a feeling and a mood and therefore how better to express your passion and commitment to a subject such as brain tumour research than by wearing a fantastic hat?  It immediately creates a statement and it doesn't matter what the hat is or how much it costs; everybody who gets involved will feel a million dollars on the day, whilst also raising much needed research funds and awareness."

Philip’s support as patron has extended to donating wonderful hats for auction and for our Wear A Hat Day campaign he designed a beautifully elegant, limited edition brooch. 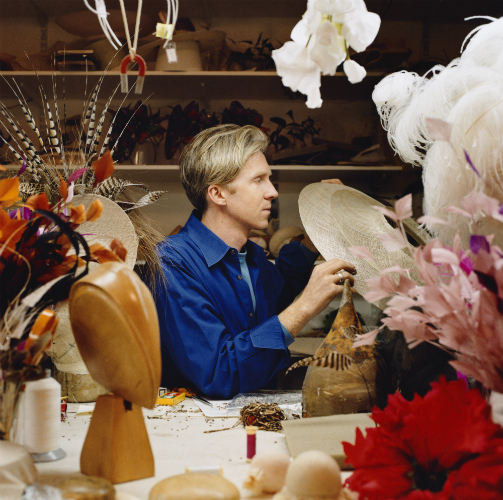